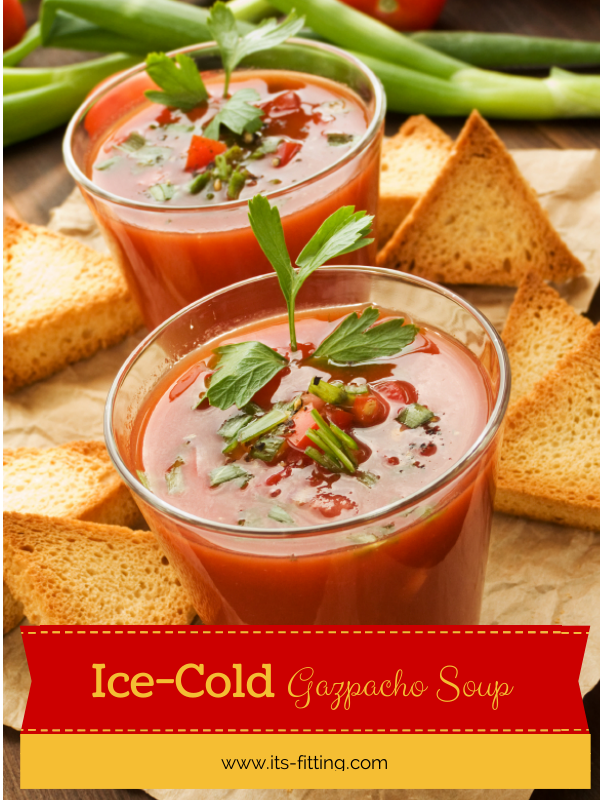 So I prepared to write this post this morning, when the sun was shining and it was glorious outside because this is one of my FAVORITE summertime meals.

Yeah, now that it’s cold and even misting a little bit right now? I’d rather bust out the new French Oven and make a stew. Brrrrrr.

But, I know that there are PLENTY of people across the country that are sweating their asses off, and this recipe really is the best thing for that. Now I may be strange but when it’s hot outside? Eating really seems like the last thing in the world I want to do. Maybe some nice chilled watermelon, or fruit, but anything else heavy? Blech. Just seems gross.

This recipe used to be my go-to in high school and college when I lived in Virginia and the summers were ugly. Hot and humid. When the thought of eating anything was like, OMGSOGROSS. But my mom liked to make this recipe because it is so refreshing… and cold… and yes, it’s soup.

The funny thing is that gazpacho really isn’t the totally weird food it used to be when I was bringing it for lunch in high school. Nowadays, you can find gazpacho made out of strictly cucumbers and green veggies, you can find fruit gazpachos and you can get the traditional tomato based one that I’m giving you.

Anyway… It’s divine stuff when it’s hot outside… and stupidly easy to make. I even feel kind of weird posting a “recipe” since I literally just chopped up a million pounds of veggies, threw some tomato juice in there, a few spices and VOILA! Gazpacho. But you can change it to suit your taste. Hate peppers? Take them out. Love cucumbers? Add another one. And if you find that at the end of the prep, you have too many veggies? Just add more tomato juice. Again, this recipe is stupid proof.

But, I think that if you live where it’s hot and you love fresh, crunchy veggies… go for it. It’s damn good stuff.

Seedless cucumber – You can use a regular cucumber, but if you do, peel it and take out the seeds as they can be really bitter. I say just buy the seedless cucumber.

Red Peppers – 1 or 2, kind of depends on how much you want in there.

Half of a Red Onion – too much of this stuff is going to CRUSH your breath… so easy on the onions.

2 large bottles of Tomato Juice – There are a ton of variations on this stuff… I say go with the one that has the least sodium and isn’t super spicy. Those are all things that you can add in later to taste. You don’t want your super refreshing cold soup to make you all swollen and fat from water retention. Also, it’s nice to have an extra bottle to thin out the soup and to add more later in the week when you start to run out.

Tapatio or any Hot Sauce – to Taste

Dash of salt – to taste

Now there are a few different ways that you can put this together. I like to practice my chopping skills (because I really am a TOTAL weirdo about cooking and kind of want to be on the Cooking Channel) so I chop this all up by hand. I also like big chunks of refreshing veggie goodness.

Some people like to use their food processor and chop the veggies a little bit finer, to make a thicker soup. Do whatever you like, but I would suggest not pureeing them TOO much… otherwise you’re just going to end up with V8.

However you choose to do it, prep and chop all of your veggies into the sizes that you’d like. Add it into a bowl. Finely mince the garlic and add it to the bowl. You’re not going to be cooking it, so it needs to be FINE. Big mouthfuls of raw garlic are not so nice. Dump the tomato juice over the vegetables. Just start by covering them in the bowl and you can add more tomato juice later if you want to thin it out a little bit. Add in the Worcestershire Sauce to taste. Do the same with the red wine vinegar and the hot sauce.

Now I love hot sauce. Like LOVE LOVE LOVE spicy food. So I tend to kill this soup with Tapatio because I’m generally the only person in the house that will eat it (hubs is allergic to peppers) and I want it HOT. Be careful though, as the heat will sneak up on you. Go sparingly so it doesn’t feel like you’re drinking salsa.

Add the salt and pepper to taste.

When you serve it, put a dollop of either sour cream, greek yogurt or creme freche to nicely round out all of the flavors and mellow out the spice, then garnish with cilantro. You could also make it a meal by adding either shrimp or avocado.

Regardless of how you make it, this is a delicious way to eat on a hot summer night… ENJOY!