Is there anything more adorable than this picture? 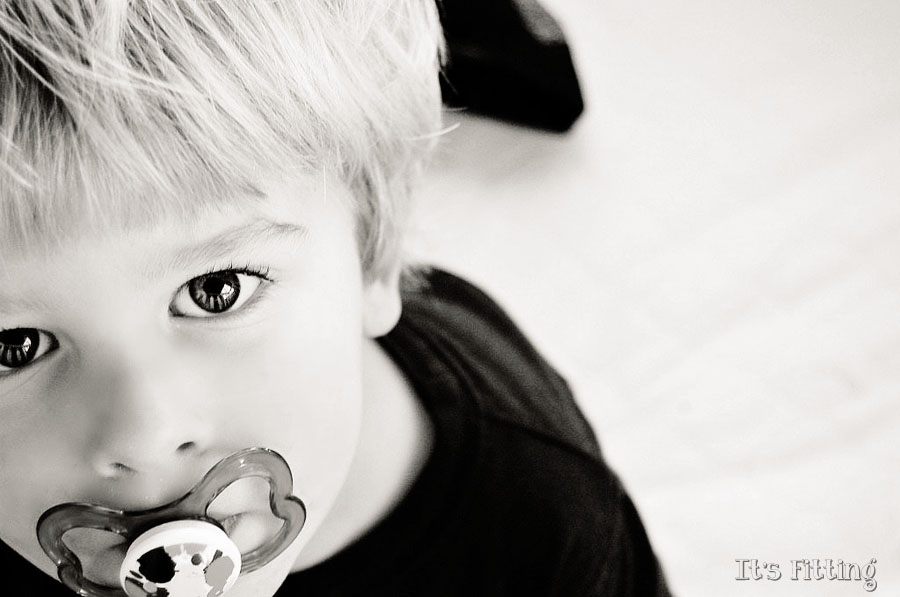 He’s so cute and his eyes are so big and it’s just the perfect picture ever. Oh, except for that stupid pacifier.

We started him out with the pacifier back at the beginning, when he wouldn’t sleep at ALL, and decided that he wanted to use my boobs to comfort suck. It totally blew, no one was sleeping and my poor boobage looked like raw meat. (Horrifying, no?) After trying pacifier after pacifier, one finally stuck and we had a sleeping baby on our hands. Hooray. But I knew that somewhere down the line, waaaay into the future where I didn’t want to look, we were going to have to get rid of the damn thing, but at that point in time? I was in survival mode, I needed sleep and if that was the only way I was going to get it? By god give him the damn paci.

So yeah. We are currently in that future place that I feared. With another kiddo on the way, I know that it’s either now or never in giving up the beloved paci, because I don’t want him stealing it from the baby if we go that route with her, and/or hating her for the fact that she has one and he doesn’t. I also don’t want to traumatize him for life with this whole process, but seriously, it needs to be done.

So I researched different ideas on how to go about this with minimal damage to his psyche and minimal damage to my wallet from years of therapy. He’s already been weaned to the point that he only gets it during naps and bedtime, so we really are at the last stage of the game.

We have been talking about it, letting him know that the pacifier will eventually go away, because he’s such a BIG boy and only BABIES use pacifiers. He’s unfazed. “Well I guess I’m just a baby then…” Shit.

I tried the “Paci Fairy” route too, but he pretty much told the PF to go F herself and to screw those other babies who needed his paci… he would keep his thankyouverymuch.

So we have moved on to technique number 3… poking a hole in the paci so that it’s “broken”.

Online, it seemed so easy. So cut and dry. So simple to merely poke a hole in the stupid thing, the kid would decide that it was broken, couldn’t be used and simply go to bed without it.

I was unprepared. (I’m sensing a trend here…no?) So very unprepared for what happened today at nap time.

I had made the mistake of first snipping off the end of the pacifier like I had read on one website (which shall remain nameless because right now I HATE THEM). I snipped it off, handed it to him for nap and waited to see what happened. He stuck it in his mouth, pulled it out, put his finger in the ever widening hole and said “It’s broken Mama, I need another one.”

“Uh, baby, there isn’t another one… that’s the only one I can find.”

*oh the SHAME of lying to your children*

His eyes welled up with tears as he handed it back to me and said, “I need another one Mama, this one is broken. Please get me another one?”.

And it was that look, that pleading in his eyes, that reasonable request to give him one that wasn’t broken, to FIX THE PROBLEM DAMMIT BECAUSE YOU ARE MOM AND THAT’S WHAT YOU DO.

So I caved and gave him another one… because I couldn’t handle the pressure. Because I’m a total sucker.

But next time kid. NEXT TIME. I WILL PREVAIL!!!

Did you have to fight the pacifier war with YOUR kid? What did you do?