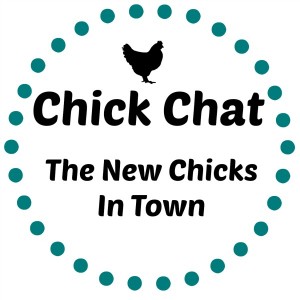 So the coop has been all atwitter with activity these days… ever since the New Girls came to town.

I was feeling like we needed some new blood after Betty met her unfortunate demise a few months ago, but introducing newbies into an existing flock can be a little… well, complicated. I wanted to believe that my chickens were awesome and would welcome new girls with open arms, but I had a hunch that might not be the case. Just because they hadn’t henpecked each other didn’t mean they weren’t going to go straight up gangsta bitch on some other new chickens.

So we brought them home, which is always traumatizing for everyone, what with the chasing and catching and the stuffing into cages and all… and I tried to figure out how to quarantine them. They had been vaccinated but I didn’t really want them introducing some sort of nastiness to my girls and I still wasn’t sure how the gang was going to react.

Luckily they have a huge run and I was able to create a relatively big space for the new girls to live in but almost immediately Wilma (Head gangsta bitch) was up against the wire, pecking at any unsuspecting pullet that was walking by. This was certainly not the neighborly moment I expected. The other two were less concerned but still felt the need to keep the Littles from getting to close to the edge of their camp with nasty little pecks and squawks and much flapping of wings.

So yeah. This could take a while.

For weeks this went on, with Wilma leading the charge against any Little that managed to get in her way. Finally they were big enough to start thinking about an introduction but all I could think of was the carnage I was going to have to deal with if this went wrong. I wasn’t even going to THINK about naming them until they were all together and unscathed.

When we finally did have the big meet and greet, I spent a long time in the run with them, acting as the intermediary to make sure things stayed civil. Suffice it to say it went fine. I wouldn’t say great because Big Bad Wilma still rampages now and then and the three girls live in constant fear of her, but no one has died. The New Girls still hate me, probably because of the trauma of their delivery, but slowly they will learn that I am the Biggest and Baddest of the Hens in my flock and also the provider of food and water. I’m a good one to know.

So welcome to the Newbies… Mamie, Eleanor and Dolly. May you live long and lay many eggs. 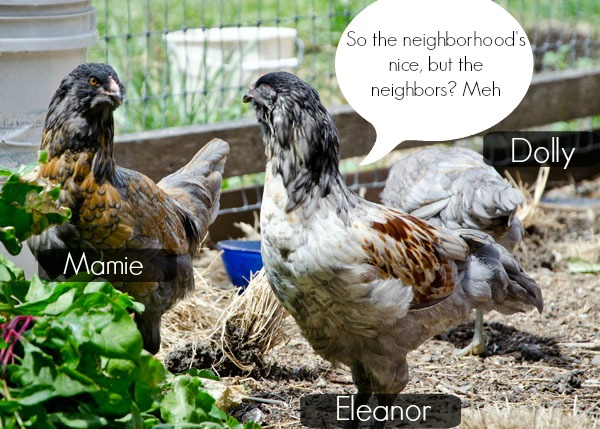 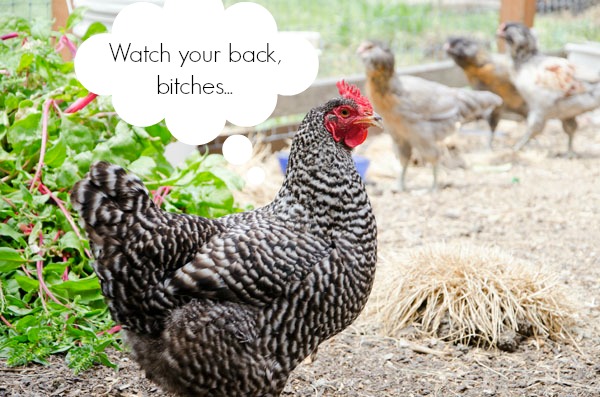