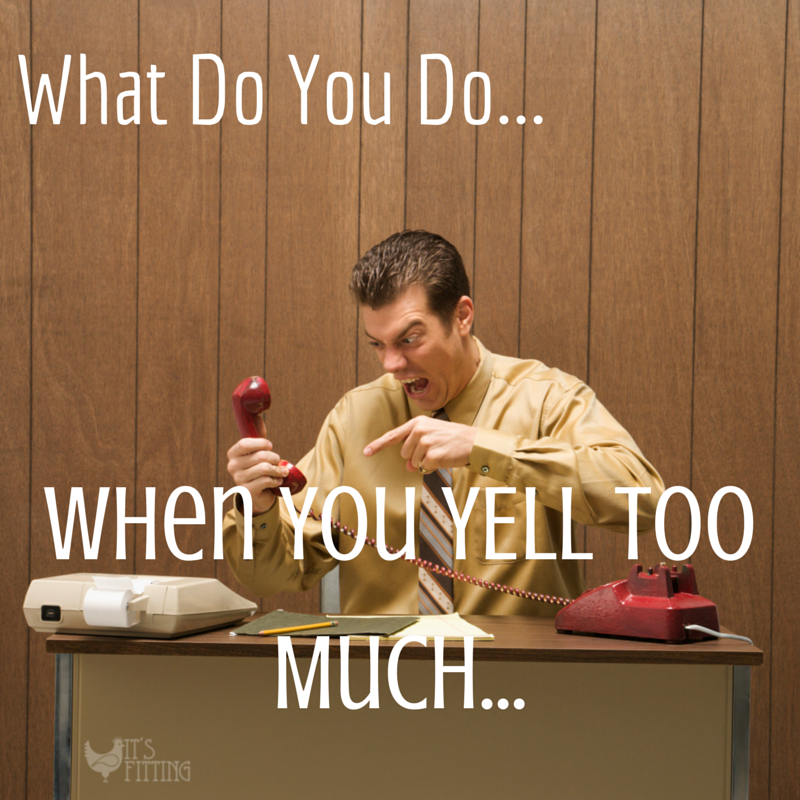 I’m a yeller. SUCH a yeller. I get frustrated, or sad, or overwhelmed, and even though I try to work out, to take care of my body and my mind, I BLOW. And I’m finding that it’s getting worse…

I hate the yelling, but sometimes it just bubbles up to the surface and I can’t stop. I hate yelling at my kids, angry and frustrated at something they’ve done, yelling instead of talking it through calmly. But I feel like I’m yelling all.the.time.

There are so many things that I can’t control these days. My parents getting older, not listening to reason and taking care of themselves like they “should”. My kids, just being kids and being something that I have to accept… after all I had them for a reason… I didn’t honestly believe I was going to give birth to 40 year old rational human beings, right?

I don’t want to yell as much as I do, but I get stuck in a head space and I stay there, for hours or even days, and have a hard time getting out. And I need a way to break free. A way to teach my kids that yelling isn’t the answer, that even when the Peanut throws poop (omfg TWICE this week) I don’t need to lose my everlovingshit.

Even though poop throwing is pretty extreme…

I need a way to cope with frustration, with anger that wells just below the surface. Anger and frustration that quite honestly scares me sometimes with its intensity and makes me regret the things that I say when I’m yelling.

The irony is that in public, out in front of people that do not MATTER to me, I’m the picture of a patient mom. Kind words, redirection, the “mom whisper” commanding much more respect from my kids… but at home, in front of the very little people I’m trying to mold into decent human beings, I’m a nut. I lose my cool faster than I should and seem to be running at DefCon 1 24/7.

Because yesterday, as I yelled and cried hysterically at my 74 year old post operation father? I realized that there was a time and place for the conversation… and even though I am interminably frustrated, I need to take a deep breathe and stop.the.yelling.

I vow to somehow, stop.  But I need some support because it feels like lately, the only level my voice works on is full-volume.

And that sucks for everyone involved… especially me.

Do you find yourself quick to get angry? To yell? What do you do to calm down and diffuse the anger or frustration?