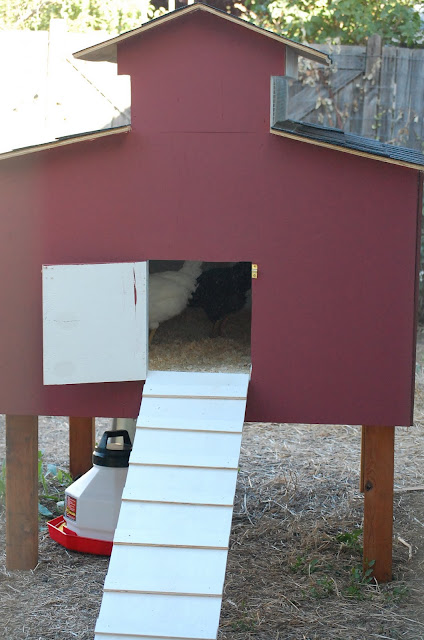 So once we decided that it was really time to put some poultry in the henhouse, my girlfriend and I headed up to the local feed store to check out the selection and decide which lucky hens were coming home with us.

Once we picked them out, the feed store worker unceremoniously grabbed them by the feet, wrestled them out of the cage and shoved them in a box. All of us were completely traumatized… the chickens probably more so, but it might be a toss up.

Driving them home in my Passat was an ordeal. Every turn had them scrabbling for purchase on the slick floor of the cardboard box and there was squawking and pecking and pooping and just general FREAKING OUT in the back seat. I was pretty sure that I was going to have killed them all by the time we got home.

Thankfully we all survived and turned them loose in their new digs. They were cautious, obviously still a little traumatized by the car ride, but eventually took to their new home.

A few hours later came the question of, “How do we get them to go into their fancy chicken coop?”. I was pretty sure that they weren’t going to instinctively know that it was theirs and I knew they were going to want to roost as the sun went down.

When I came into the run to see my two little girls Wilma and Betty snuggling in the corner, I knew we were probably going to have to physically put them into the coop. Which meant I was going to have to not only touch them, but catch them. Gulp.

I’d love to say that my farming instincts took over and that it was all very easy and fluid. Ha. I ran around like a fool, trying to grab their sleek little bodies as they dodged in and out of my grasp. It was embarrassing to say the least, but eventually Wilma and Betty were thrown into the coop. Thelma and Louise were a totally different story and we decided to take five and try again once it got a little darker.

Damn birds were smarter than we were.

I was sitting outside on the patio when I heard the WHOOOOSH of flapping wings.

As my girlfriend and I raced to the chicken run, Brian came sprinting out the back door as we screamed and yelled and then looked up in consternation at the two runaways (flyaways?) that were sitting in our redwood tree.

A broom, a chair and some more traumatized chickens later, we managed to get everyone into their beds for the night. It was our first night as farmers and I was in DEFINITE need of a cocktail. Or six.

Luckily, things have gotten much better since then. There’s no more chasing into the house every night and the girls are happy to bed down as the sun starts to set. They have shown us a little more personality and are aptly named. Thelma and Louise continue to be the bigger, more active and feisty birds, while Wilma and Betty are just sweet little girls.

Its definitely been an adventure so far, and now they just need to start earning their keep by laying some damn eggs… 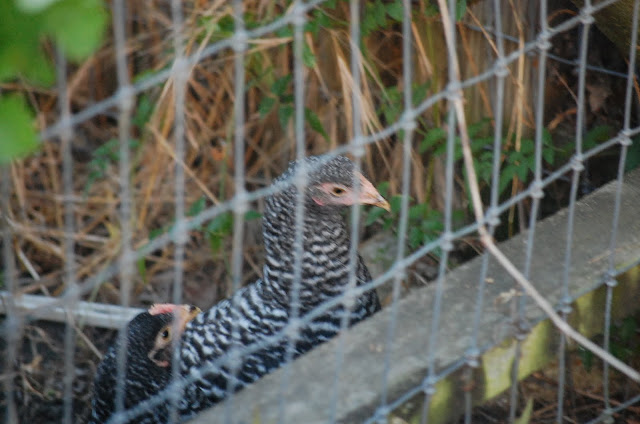