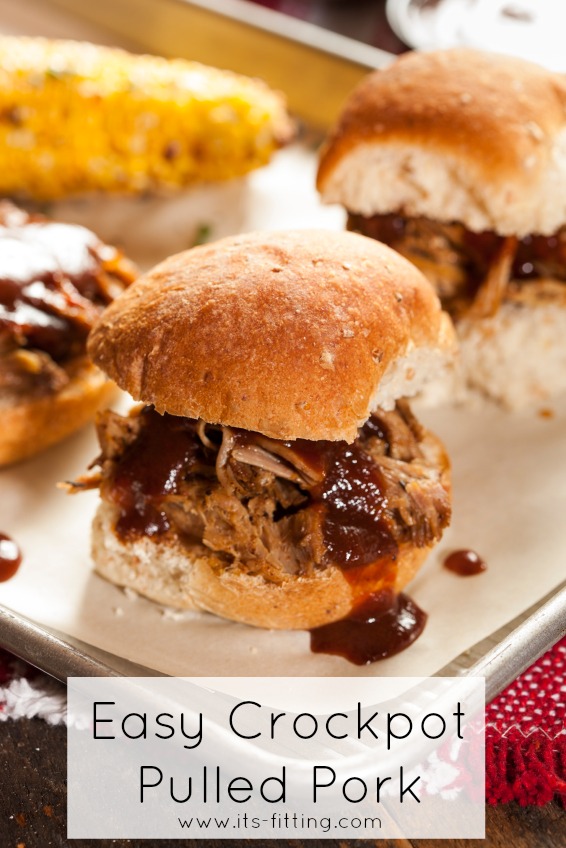 Yeah, running a little late with this one. Yesterday was a day spent traveling back from San Diego – an awesome trip, but always a little exhausting. But fun! And pictures to follow!

So in honor of the long BBQ-filled weekend I present – Pulled Pork.

Having spent about 10 years living in the sort-of south, good BBQ is an art form. And while I don’t think I’ll be submitting my pulled pork into any hard core BBQ competitions… you know the ones… where you bring your own cooker and it’s in the shape of a pig and attaches to your F150… I still think it’s pretty damn good stuff.

It’s been served to the delight of hundreds at Coronado’s Concert in the Park. It’s a legend in my mom’s circle and the recipe has been sent around the country. It’s easy to transport and is easy to eat without a plate! Perfect picnic food.

So on this perfect weekend to kick off a season of grilling, picnics and outdoor concerts, I give you Slow Cooker Pulled Pork. (Too bad it’s like 49 degrees at my house right now… any BBQ’s here are going to be a little bit chilly. Bring a coat)

5-6 pound Pork Roast – I used a boston butt… which is actually a shoulder – so confusing… but you could also use a picnic steak too… it’s another cut of pork. Anything tough and fatty is going to do the trick. Sounds weird, but it makes the BEST pulled pork. As long as you cook it low and slow.

Hickory flavored BBQ sauce – I like my pulled pork more saucy… rowr. But whatever floats your boat.

Salt and Pepper to taste

Place the roast in a slow cooker – add 1/2 to 1 cup of water, Worcestershire Sauce, 3 TB of Liquid Smoke, bay leaves, onions, garlic and salt and pepper. I turned my slow cooker onto High and let cook overnight. Once the pork is cooked through and shreds with a fork, remove from crock pot and let cool. Shred all of the pork and discard the cooking liquid that is leftover… (I had to call my mother to confirm this… was a little concerned about what to do with all that leftover stuff)

Once the pork is shredded, put back into the crockpot and sauce LIBERALLY. Add a little water to thin down the sauce and 2 tsp of liquid smoke – simmer slowly (Crockpot on LOW) for a few hours… 2-3 seems best. It’s ready!!!

I like to serve this with slider rolls, for two reasons. Sliders are freaking adorable little bites of GOODNESS and it makes the pork go a LONG way.

Serve it with some coleslaw, potato salad, or in our case, about 9 more pounds of meat… and you have a Fitting Family BBQ!! Have a great weekend and hopefully it’s BBQ weather where you are!!

Are you looking for other recipes for your SuperBowl party? Check out my recipe for SuperBowl Chili AWESOMENESS!!!