I KNOW it was last week. I KNOW I KNOW I KNOW. So sue me. In a perfect world, this would have been out even before Halloween but that would have assumed that I wasn’t 34 weeks pregnant, having contractions and dealing with a beast of a 3 year old. So let’s just pretend it’s last week, shall we?

Did you all see the cuteness that was my Snoopy? 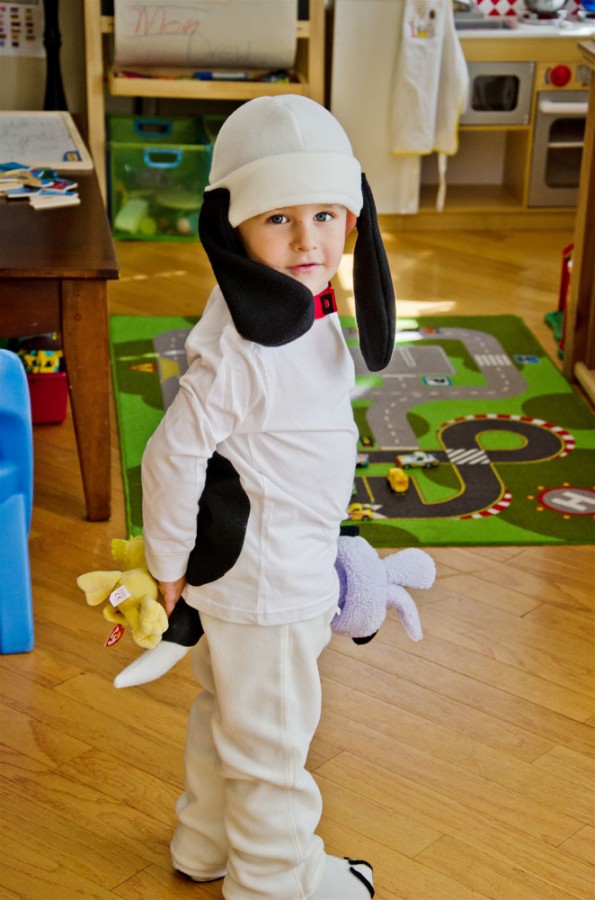 I mean, could you just DIE from the adorable?

You’re just lucky there’s no sound on these pictures because the backtalk from that Snoopy would have you sending his ass to the pound for sure.

The best part is? It was a totally easy costume to make.

I knew that he wasn’t going to be ok with a big Snoopy head, and that simpler was going to be better if I wanted him to look like a puppy instead of a kid wearing white and black, but trying to find a template to make this costume? Not so easy.

So instead I pieced together pictures of Snoopy and ideas of what I thought he needed to have (ie. a tail, a red collar, floppy ears, puppy feet) and just went with that. I did use my sewing machine, but almost the entire costume could have been sewn by hand. (The boot covers would have been kind of a pain, but could be done!)

So what will you need to make your Snoopy Costume??

*I started with the fleece hat and the ears. I bought the hat from Old Navy , (in a woman’s size because my child has an alarmingly large melon), the pants from the toddler girl’s section of Old Navy (don’t tell my son), a white turtleneck from Kohl’s and the rest of the fabric from JoAnn’s. I got about a half of a yard of everything, maybe a little bit more, but I’m also kind of a fabric hoarder.

* I sketched out the ears and cut them out of the black fleece. Use this “pattern” to cut them out and sew them… (I make no pretense at being an expert pattern maker or seamstress…)
Once I had my Snoopy ears sewed and flipped, I attached them to the white fleece hat by hand-stitching them to the outside. Eyeball where they need to go, as it’s going to depend on your kid and their head and how big the hat is. Just make sure they are even on both sides… otherwise your Snoopy is going to look askew. Or drunk.

* Once I finished with the hat, I started to look at making the white fleece boot covers. You can use these for ANY costume that you need to make! It’s so awesome. I found a tutorial from Fabric.Com Blog and just followed that. Once I finished sewing the covers together, I added the black felt to designate the “paws”. 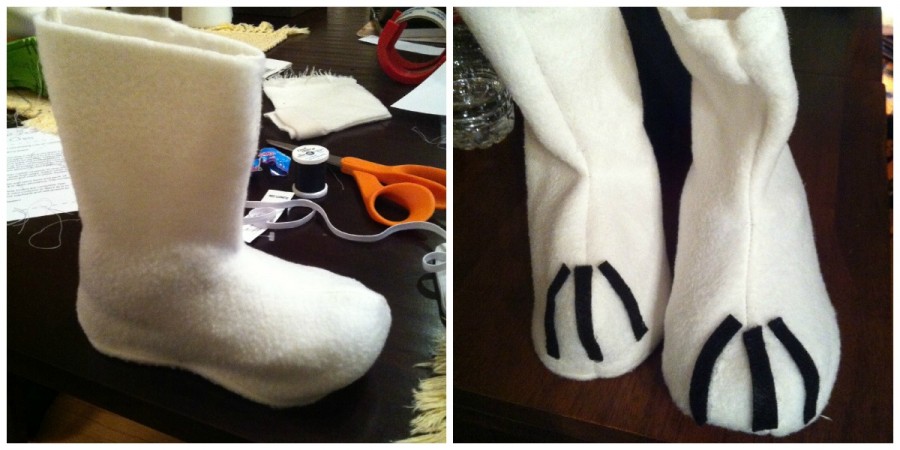 *Once the feet and hat were finished,  I made the tail. I drew something that looked relatively tail-shaped onto a piece of paper, then cut it out of the white fleece. Like before, I sewed it together, wrong side out, then flipped it once it was finished. (This is easier to do with the eraser end of a pencil, so that you get the point of the tail really pointy.) I stuffed it with batting to made it stand out, then hand stitched it to the backside of the white fleece pants. I will not lie, this was the kid’s FAVORITE part of the whole costume. He ran around “wagging” his tail for DAYS before Halloween. DAAAAAYS.

*The spots were easy. Cut out a large spot out of the black felt for the back and a smaller spot for the tail. Attach using a glue gun. (NO SEWING, HURRAY) 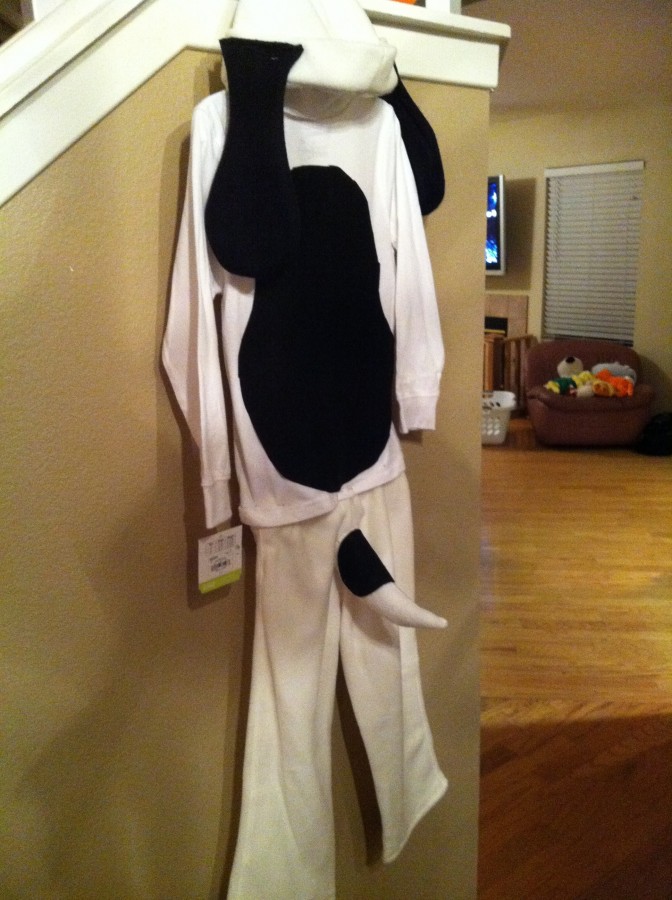 *Now the collar. The only reason I did a turtleneck for the costume was because a) I figured it would be cold, and b) I hesitated to actually wrap something around my preschooler’s neck… especially something like a dog collar. So instead, I made the collar out of red felt and sew-on velcro and put it around the turtleneck. Don’t attach it to the turtleneck, because otherwise you’ll never get the dang thing over his head, but just put it around the outside. You could even glue the velcro on with the glue-gun that is still hot from attaching the spots. Make it easy folks.

That’s it! It didn’t cost me that much, was SUPER cute and he loved it. I even found him a Woodstock online that played the Peanuts Theme, so he had his own theme music as he trick or treated. The only thing that Snoopy could have needed to complete the outfit was his very own Great Pumpkin. And he totally got it. 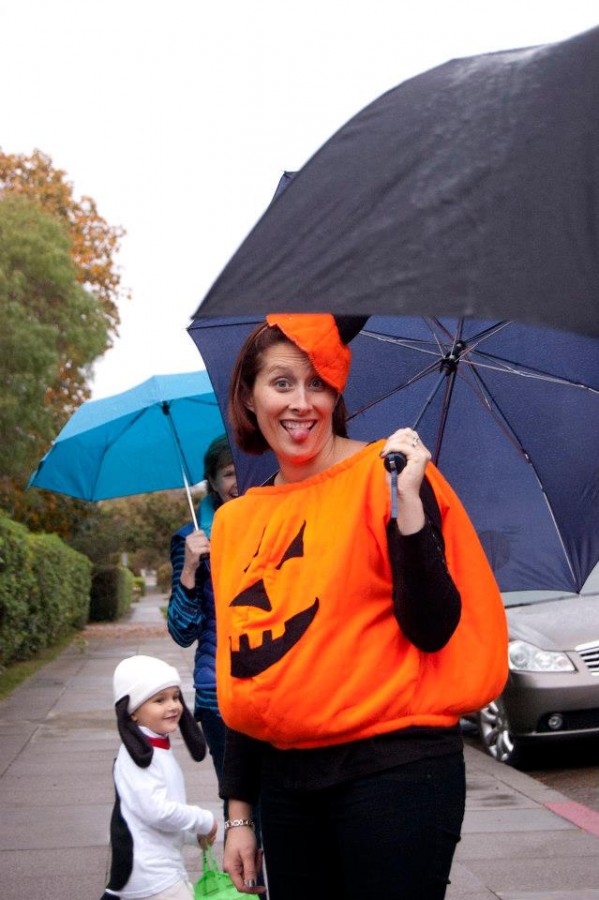 I mean honestly, what the hell ELSE could I be 34 weeks pregnant??