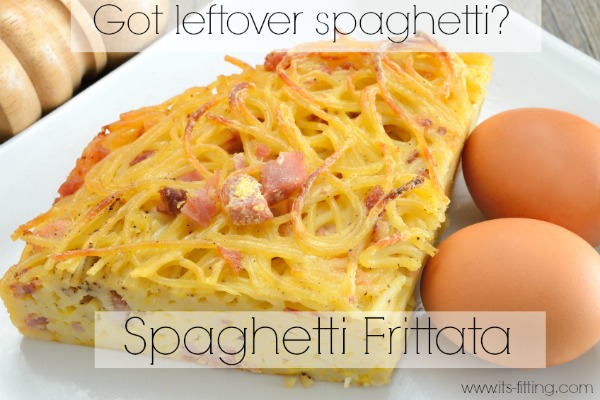 You guys know that I love to cook. But what you probably don’t know is that while I love to cook, I love to re-purpose even more. So I always make enough food for a small army, assuming that I can whip something together with the leftovers once we are done with it. Because leftovers are OK, but something completely new? EVEN BETTER.

The one thing I was getting bored with was leftover spaghetti. I’d made spaghetti and meatballs the night before, but didn’t really want to do a baked pasta dish with it the next day. I wanted to do something completely different… but what?

How about Spaghetti Frittata?

I remembered seeing a cooking show a long time ago where they talked about what the Italians do when they have leftover spaghetti, but I couldn’t quite remember the recipe… or ingredients for that matter. So I threw together this, and kind of took the “kitchen sink” approach to it. If it’s in the fridge? It’s fair game.

Guys, this frittata turned out AMAZING. It was fluffy like a quiche, but filling enough because of the pasta. It had a TON of veggies in it from the fridge and the garden and the Big Kid devoured it two nights in a row. I personally had it for dinner one night, then breakfast the next day, and then dinner again that night. It was THAT GOOD.

And it used everything we had. I decided to use kale and chard from the garden, along with some grape tomatoes that were just about to go past their prime. I used the whole wheat spaghetti I had cooked a few nights before, and the cheese I had in the fridge, which happened to be mozzarella and feta. But the best part of the whole thing was that I could have used ANYTHING.

It really was the perfect way to use up leftover spaghetti and I’ll be making a LOT of extras the next time, just so I can make more Leftover Spaghetti Frittata!

Any veggies you have on hand. I used the following, cut into a small dice:

Cheese – again, whatever you have on hand. I used Mozzarella and Feta for some super flavor but lots of melty cheesiness.

You want to make sure that your pan is big enough to accommodate all of your pasta, veggies AND the egg. You don’t have to use all the pasta just because it’s there and you need to have enough eggs to cover the pasta. Just be aware of how much is going into the pan before you start!!!

Set the oven to Broil.

Crack your eggs into a bowl and add a splash of milk, salt and pepper. Whisk together and then set aside. Again, remember that you need to have enough eggs to cover the spaghetti in the pan, which for me turned out to be about half a dozen. If you don’t want to make your frittata that large, or you don’t have enough eggs, then just use less pasta.

Drizzle olive oil into an oven proof saute pan and cook whatever veggies you have chosen until soft. Season the veggies well, since the pasta will more than likely be relatively unseasoned and will need flavor. Remember that you’re going to want everything chopped fairly small and the same size to ensure even distribution in the pasta.

Once the veggies are ready to go, add another generous swirl of olive oil (this helps keep the spaghetti from sticking to the pan) and throw your leftover spaghetti in. Stir the spaghetti and the veggies together until they are well mixed.

Once everything is evenly distributed, pour your egg mixture over the top. Let cook for a few minutes to start setting the egg, then add your shredded cheese on top. I put mozzarella throughout the frittata and then crumbled feta on top for a salty bite. The eggs should start to set, but cover with a lid and cook for a few minutes more to make sure they cook on top and all the way through. Check to make sure they are set in the middle before moving on to the next step.

Once the eggs are set and cooked all the way through, take the whole pan and place under the broiler. Keep an eye on it, because you just want the cheese to get all nice and melt-y and a little bit toasty on top but burning is BAD.

Once the cheese has melted, remove from the broiler and let sit for a few minutes to cool and to set. I took this time to sprinkle freshly chopped basil on top for a little more flavor.

Thanks to the olive oil in the pan, it should slide right out onto a cutting board, where you can cut and serve! I served it up with a nice arugula salad.

This is a GREAT way to use that leftover spaghetti you might have lying around and any type of noodle would probably work as well!