Ever had a problem with your kids being picky eaters? Yeah.. me too. But Lisa from Notes from the Shallow End has a “problem” I’d kill to have…can your kids please come be “picky” at my house???

Like a lot of kids, ours are picky eaters. Just not in the way you might think. They’ll turn up their noses at chicken nuggets in favor of stealing half of what’s on my plate. It’s the “Accidentally Turn Your Kids into Food Snobs and You’ll Eat Less!” diet. Brilliant, huh? 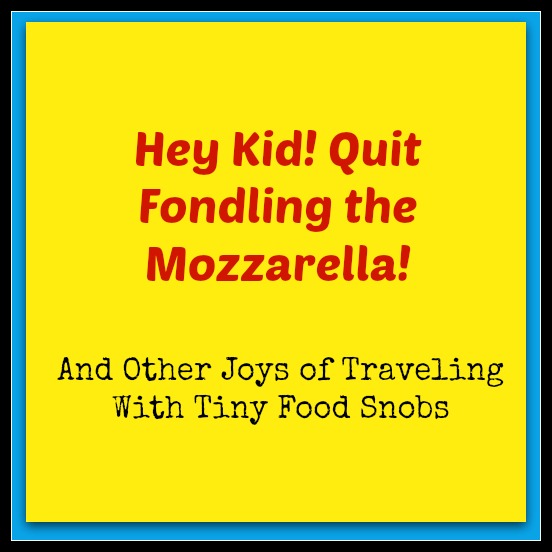 My husband and I have always loved food and cooking. I mean, it’s not unheard of for us to drive (ahem) a considerable distance out of our way for a great wood-fired pizza, and he has been known to rise at dawn to get to the downtown farmers’ market before the artisan bread maker sells out.  When we plan a trip, we research the best places to eat long before we arrive at a destination, and any locale that doesn’t also feature good food is a no-go. Yep, we’re firm believers that life is too short to eat bad food.

Now, don’t get me wrong. We don’t ban junk food. My kids have consumed enough Cheeze-Its in their lifetimes that I’m surprised they’re not day-glo orange and crispy.  But they’ve also grown up seeing it as normal to drive thirty miles out of the way for an award-winning burger, as opposed to just ducking off of the highway for a quick foray into the nearest fast food joint.

My husband is a typical guy, who enjoys the challenge of getting to a destination quickly, with as few stops as possible. Happiness and peace abounds when he can shave an hour off of a trip that is supposed to take ten, and like a badge of honor he’ll talk about his victory for days afterwards. But his desire to try one of the top five barbeque places in the U.S.A., or locate the exquisite hand-turned frozen custard place he read about, often trumps his need to “get there yesterday”, and directly informs my kids’ decidedly fussy eating habits.

It all started innocently enough. Vacations with the kids included stops at places like Pepe’s Pizza in New Haven, Zingermans in Ann Arbor, and the Shake Shack in New York. And pretty soon I began to notice something suspicious. The kids were turning up their noses at our local pizza chain, and the name Kraft was becoming persona non grata.

And now? They’ve come to expect the good stuff.

Try to save any time on a road trip by pulling through the nearest drive-thru and we may as well be trying to force feed a rib eye to Alicia Silverstone. Cries of “Eeewww! It’s so unhealthy!” and “But it’s not even real foooooood!” will erupt quicker than the clown can say canItakeyourorderplease.

I blame myself. I do.  So for every trip my penance is packing enough sandwiches, fruit, cheese, and snacks to feed an army (of five, anyway). And when those run out we’ll find an out-of-the way spot, one that features authentic Mexican food, locally sourced preserves or one that hand-crafts cheese from grass fed buffalo.

My kids will be easy to spot – they’ll be the ones ogling the mozzarella.

Lisa is a mother of three and wife to the most patient man on earth. She reads obsessively, plays tennis not as often as she’d like, and is easily distracted by food, breaking celebrity news, and anything shiny. Most at home on the beach, she has naturally chosen to make Ohio her home.  Lisa writes at Notes from the Shallow End where she chronicles the funny side of everyday life, marriage, and parenthood. Visit her at her blog, or follow her on Facebook or Twitter.