Breastfeeding my first was easy… I lost my baby weight HELLA fast, I was an easy food supply, and it made me have an enormous, gigantic rack. Win!

The second time around I had for the most part the same results, except for only ONE of my boobs became enormous and I became a lopsided freak-show…

The real thing that got harder (besides having good self esteem) was traveling with a baby. Now, I travel alone with the kids a LOT, so nursing on a plane is something that I should be fully comfortable with… and to a certain extent I am. But those first couple times on the airplane? Ugh. 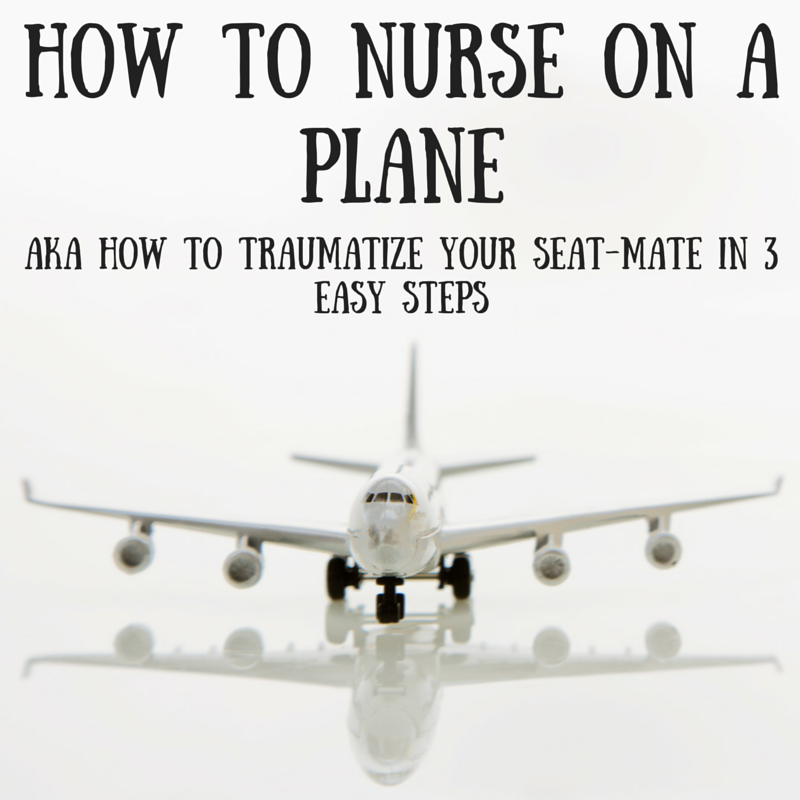 An insanely crowded airplane, stuffed to the brim with people traveling to San Diego. Me, the Big Kid and the Peanut, flying solo for the first time and traveling with all of the appropriate things for an 90 minute flight… a million pounds of crap. The Peanut and I were lucky enough to be wedged in a middle seat between the Big Kid, who was asking every 5 seconds if he could have the IPad yet and some strange dude who may or may not have been trying to sneak a peak at my boobs.

While we taxied to the runway I was trying to mentally prepare myself for feeding the little piranha. I had held her off, which had made her kind of pissy and I had to keep reminding the Big Kid that we needed to wait for the *DING* till we could play with the Ipad… and that *Ding* was still about 9999 feet away. I already had the Lassig buttoned up and I was trying to stuff the baby under it with one hand, while lifting up my shirt and unfastening my nursing bra with the other.

At some point, while wrestling my 10 pound baby who had suddenly become as wriggly as an alligator in a bag, I realized that the guy next to me was looking at my chest region with horror.

My misshapen, engorged boob was out and proud, thanks to the little monster that had my nursing scarf in her hand, as opposed to discretely over her head. She was a flailing, wriggling mess, and screaming like a banshee.

I finally got her on and covered, the Big Kid his IPad and stared out the window, trying not to glance at the man next to me who was rocking slowly back and forth and mumbling to himself in shock.

When we finally landed, he pretty much threw himself over the seats to get down the aisle and away from my lactating boob.

Pppffffft. Next time I’m not even going to bother with a shirt, or a cover. I’m just going to strip down and do it Nat Geo style…

This post, and that guy’s discomfort, were both made possible by the International Breast Milk Project. Their vision is that every infant in the world have access to donor human milk as a first choice when a mother’s own milk is not available, and they aim to create awareness for the need for donor human milk, mobilize donors, and provide donor milk to infants in need.