I had a girl to sew for this Halloween. A little baby girl who couldn’t complain about what she was wearing or tell me what she wanted, or do anything but sit relatively submissively while I dressed her in whatever I wanted.

But let’s be honest. It’s also the first year I had a girl to sew for. Glitter and tutus and headbands OH MY!

The Big Kid wanted to be a fighter pilot again this year (big shock), so I wanted to try and incorporate the Peanut’s costume to be somewhat like his… because I’m weird and matchy matchy like that and love coordinated costumes. I also figured this was the last year that the Big Kid would want to be something other than a super hero or something I could buy in the store and that I could coordinate with.

Since the Big Kid was going to be a fighter pilot, I figured I would once again degrade myself by being the large and cumbersome airplane… and the Peanut was going to make an adorable cloud.

But a cloud costume wasn’t too easy to come by, so I had to get creative. This cloud costume is easy and doesn’t even have to involve sewing! I personally used (and broke) my sewing machine and then hand sewed a few things, but hot glue would be all that you really need.

Hot glue, and lots and lots of glitter. 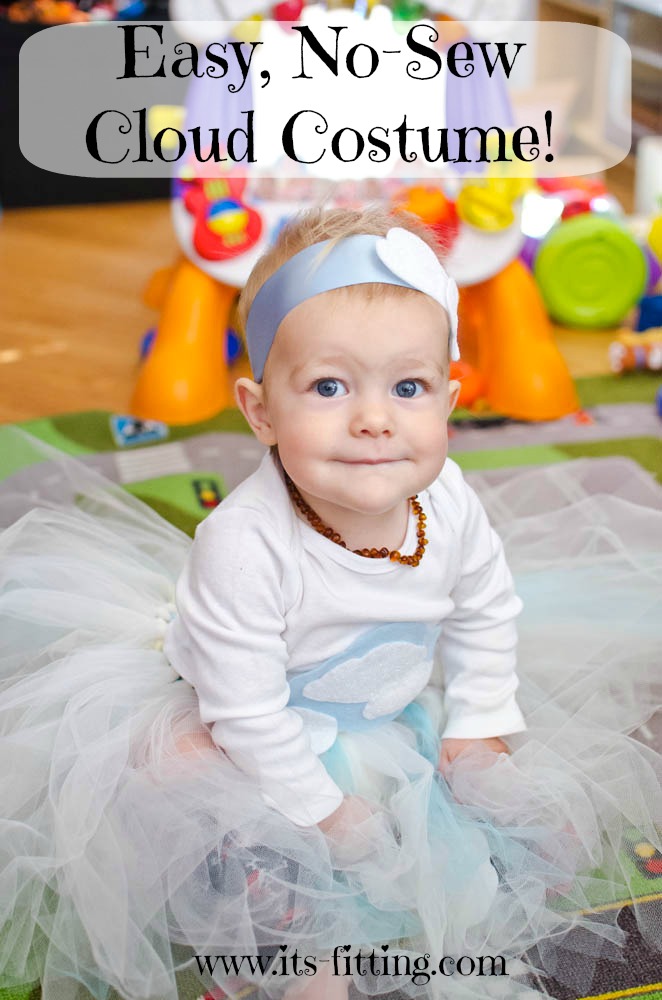 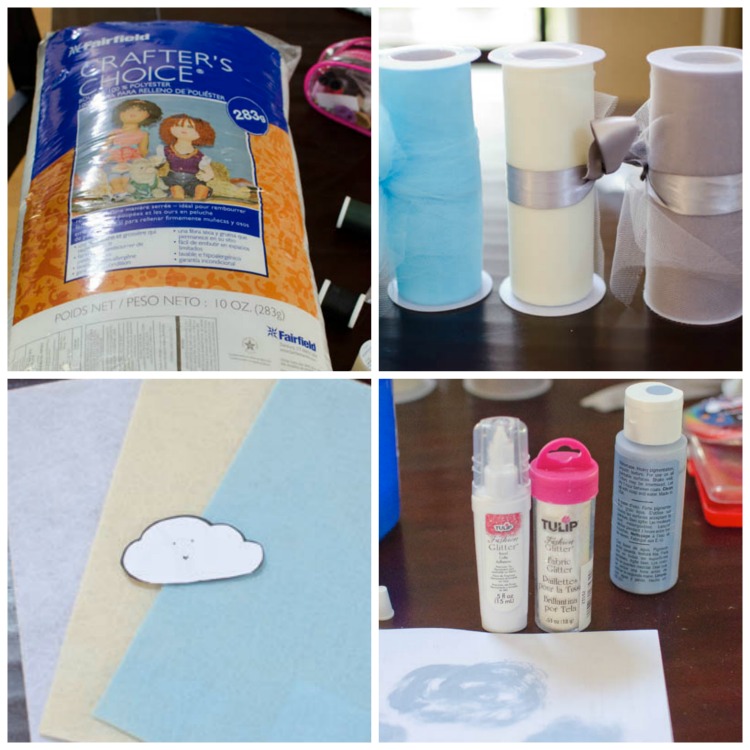 Tulip Fashion Glitter Bond – I bought the .05 oz pen and it worked perfectly for what I needed 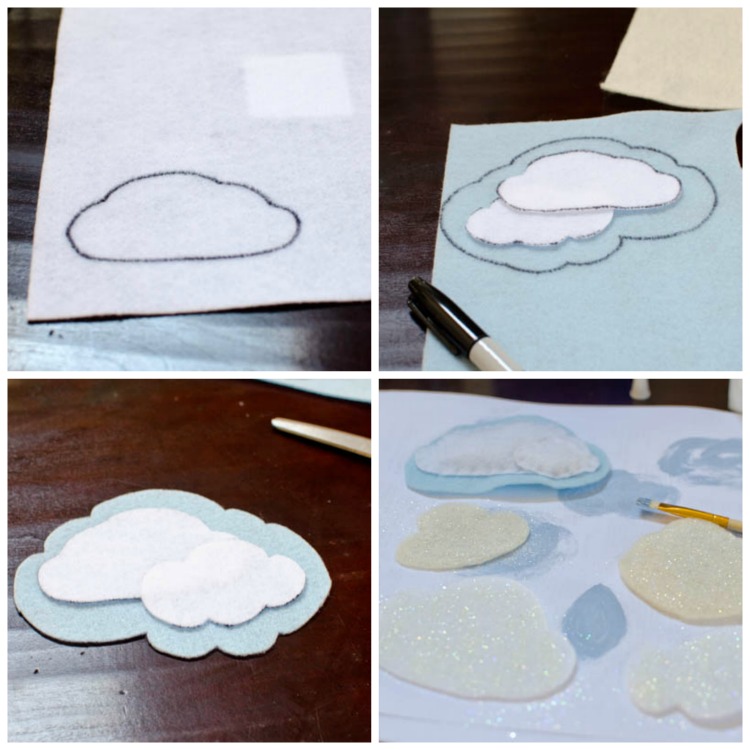 1) Print out your Cloud Costume Stencil.

2) Use your cloud stencil to make white clouds and a blue background (may I suggest however that you do NOT use a black marker like I did. You can totally see the marker around the edges and I had to re-do it… sigh)

4) Cut out the clouds you want for your headband. These are probably going to be smaller than the onesie clouds, depending on the size of the band, your kid’s head, etc.

5) Prepare yourself to glitter EVERYTHING. Start with the white clouds for the onesie, color them in with the Tulip Glitter Bond, then drown them in white glitter. Follow the directions on the Glitter Bond for the best results. It gets EVERYWHERE so make sure you are prepared… I had glitter on my clothes AND the baby before I was through. Once you have all of your pieces glittered, let them sit to dry before gluing anything together.

6) Get the white leggings and get ready to glitter those too. I’m not the artsy-est person, so I just drew clouds with the glue pen and then glittered on top of them. I also added some blue clouds for color, but I wouldn’t do that again if I had the chance. 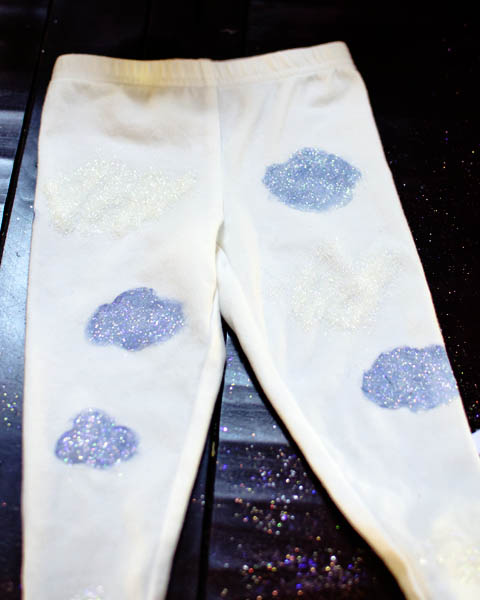 7) Once the Glitter Glue is dry you can start gluing everything down! I actually glued the clouds onto the onesie and then stitched it down afterwards… but it really was more of an aesthetic thing than anything else.

First of all, if you have a headband that you want to use already? Go ahead and use it. Or you can buy a headband pre-made at any craft store!

1) I used a wide piece of blue ribbon for my headband and a small piece of elastic. Measure your kiddo’s head and determine how much ribbon you will need to go around, with about 2-3 inches of elastic in the back. You don’t want too much elastic showing but a little bit more makes it easier to go onto the kid’s head. This was trial and error for me, and I ended up making a few headbands that didn’t fit.

2) Hem the ribbon to avoid fraying and then sew the elastic to the ribbon. If your ribbon is wide (like mine was) fold the ribbon over and sew that into place. See the picture for a better idea… I just found that it was too wide in the back for the Peanut’s teeny head. 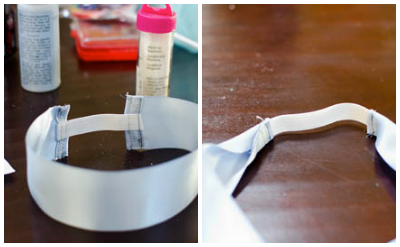 3) Glue your clouds onto the headband where you want them. I did them off to the side for a fascinator kind of look. 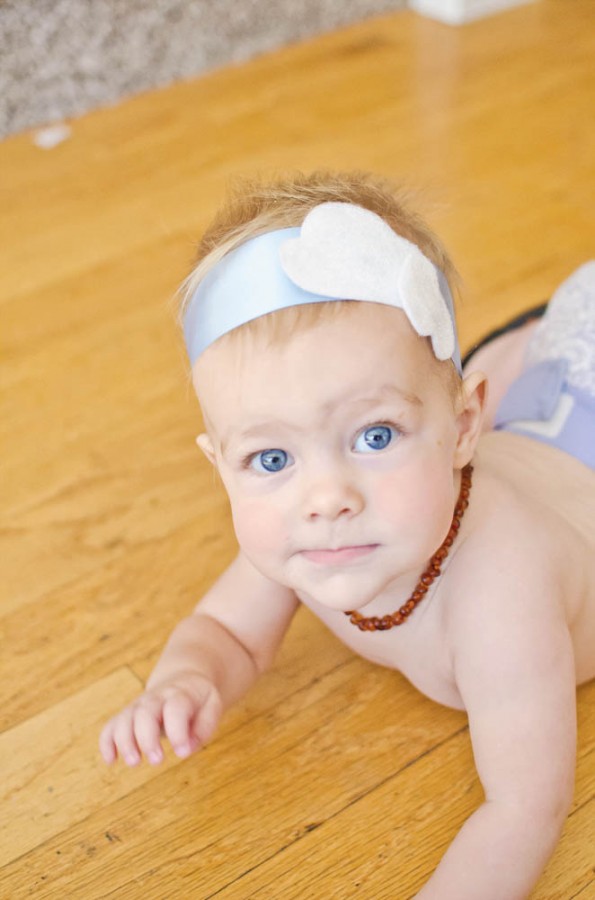 This is probably the easiest part of the whole costume! I went to Bebehblog and followed the instructions for her Easy No-Sew Tutu and VOILA! A tutu! I had some leftover clouds that I had glittered, so I glued those onto the tutu in random places to really emphasize the fact that she was INDEED a cloud.

And as The Peanut would say  “ALL DONE!”

You now have the most adorable, glittery, tutu-y cloud you’ve ever seen…

I can’t wait till next Halloween! I’ll have to start pinning now!